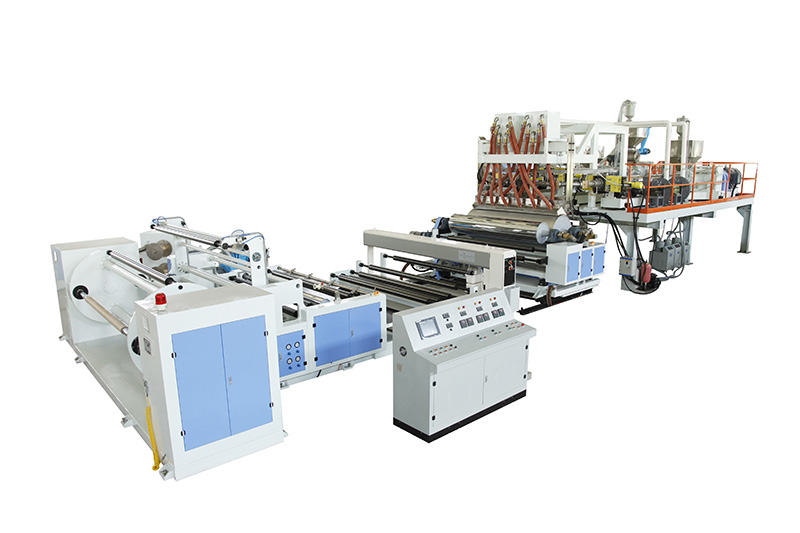 
Send email to us

CPE cast film line is well designed to produces transparent cast polyethylene film (CPE film). Equipped with auto thickness controlling system and efficient chill roll, the line produces CPE film of good transparency and low gauge variation, ideal for laminating and surface protection. 3-layer CPE film is most popular in the market.
Our CPE cast film line is equipped with gravimetric batch dosing systems to run your resin receipts with great accuracy and repeatability. The quantity of dosing components can be fixed with your exact needs. Wellson has advanced technology in extrusion systems. The extruders accept a wide range of PE polymers in the market so our customers are able to use polymer materials from their local markets. We provide many options for co-extrusion systems. 3-layer co-extrusion with feedblock is our standard for CPE film. To make sure high transparency of CPE film, the well-designed air knife distribute a constant airflow over the cross-web of CPE film.

1) Laminating film: to be laminated with BOPET or BOPA substrate film and use for frozen food packing bags or pouch.
2) Protective film: LCD surface protective film, car protective film, furniture or any other good that need surface protection.
CPE film produced by cast film line have some advantages over blown film. CPE are much better in transparency, thickness variation and other technical properties. CPE film are widely used in food packaging industry, consumer goods and surface protection. The most important is that CPE film line have much high output capacity than that of blowing film machine, and therefore it brings more benefits for investment in CPE cast film machines.
Due to the unique property of CPE film, the technical products of CPE film laminating with BOPET film, BOPA film are rapidly growing in the market. The laminated film bring us more benefits in the competitive markets.

Remarks: Other sizes of machines are available upon request.

Write your message here and send it to us